Individuals experiencing FND are often semi-conscious and clients have described that they can hear what is being said, but that they cannot speak, feel foggy, out-of-their-body, numb, or overtaken by a strong energy. Anxiety, depression, symptoms of PTSD, and difficulty concentrating often accompany FND.

Watch Dr. Moenter’s contribution to the 2020 FND virtual conference talking about her treatment approach to FND.

How is FND diagnosed?

The diagnostic process relies on finding clear positive physical features of the condition which makes FND not a diagnosis of exclusion. Due to similarities, FND can be misdiagnosed as a neurological disorder, and it can take years for the patient to find out that he, she, or they does not actually have a neurological disorder. FND has been diagnosed in children, teenagers, and adults.

FND and the Nervous System 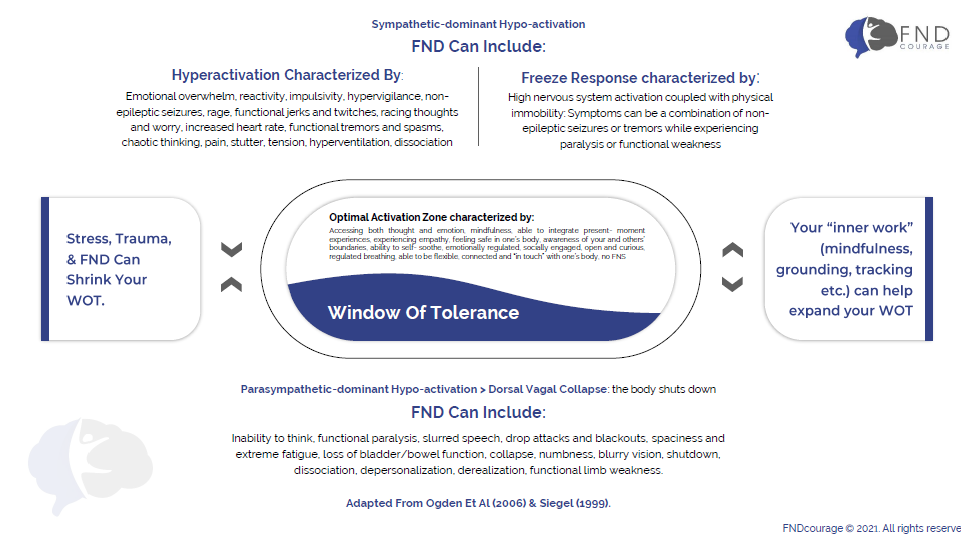 The Causes of FND

Contrary to popular belief, anybody can experience the sudden onset of FND. Age, gender, mental health, level of education, or other demographic factors seem to not have direct bearing on the onset of FND.

Some correlation exists between not only PTSD and FND, but also between being “highly sensitive” and FND. A highly sensitive person is an individual who has sensory processing difficulties, including hypersensitivity to external stimuli, a greater depth of cognitive processing, and high emotional reactivity.

Explanations for why individuals with FND are experientially disconnected from their bodies are manifold: dissociation as a survival response to trauma; cultural, familial, or religious reasons; alexithymia (difficulty identifying feelings and distinguishing between feelings and the bodily sensations of emotional arousal); or impaired interoception (the ability to sense the internal states of the body). The most widely accepted contributing etiologic factor, however, is prior exposure to chronic stress and trauma.

Dr. Moenter talks about dissociation happening on a continuum from “spacing out” to out-of-body experiences and full dissociative states such as non-epileptic seizures. The healing process involves learning how to self-regulate dissociative states early so as to not fully disconnect from the present moment experience. The ability to stay present allows for a greater capacity to be mindful of changes in nervous system activation (FND symptoms).

A typical feature of functional seizures is involuntary movement that resembles epileptic seizures. Those movements can be micro-movements (twitches, spasms, subtle shaking etc.) or macro-movements (visible large movements of the limps, head, upper or lower body) often with loss of consciousness. Some individuals have described still having self-awareness but not being able to react to the environment (responding to people asking questions, or protecting oneself from physical harm) while also not being able to self-regulate their nervous system enough to stop the seizure activity.

For some individuals with FND, symptoms are more pronounced in the realm of a hypo-activated  nervous system (not enough activation). When the nervous system is in a state of parasympathetic-dominant Hypo-activation (or dorsal vagal collapse), the body shuts down. This shut-down can be experienced as partial or full paralysis or weakness.

Other symptoms that can accompany the dorsal vagal collapse can be the inability to think, slurred speech, drop attacks and blackouts, spaciness and extreme fatigue, loss of bladder/bowel function, collapse, numbness, depersonalization, or derealization.

The central nervous system is designed to filter out redundant and unnecessary stimuli and organize sensorimotor information into an integrated experience. This process is called the “gating mechanism,” and it may be dysregulated in many clients with FND who describe a variety of sensory challenges that manifest as over-sensitivity or under-sensitivity.

Over-sensitivity, or “sensory overload,” implies a heightened sensitivity to touch, sounds, sights, textures, smells, and other sensory stimuli. Under-sensitivity can manifest as a lack of responsiveness to factors such as temperature, touch, or noise. It is possible that these symptoms are caused by sensorimotor gating impairments that prevent individuals from integrating information from internal and external sources as normal.

Trauma is the result of experiencing inescapably stressful events that overwhelm an individual’s existing coping mechanisms while obstructing information-processing abilities. It affects memory in two ways, modifying both sensorimotor and affective levels of memory formation and recall and often producing the symptoms of somatoform and psychoform as seen in FND.

Some individuals with FND have experienced chronic stress or trauma prior to the onset of FND. The exposure to life-altering adverse events can contribute to the dysregulation of the autonomic nervous system. Since FNDcourage is based on the idea that FND is an expression of a dysregulated nervous system (too much or too little activation), part of the healing process is undoubtedly the work with and resolution of any adverse nervous system changes resulting from chronic stress and/or trauma.

Although a direct causal connection between trauma and the onset of FND has not yet been identified, trauma is widely believed to be a contributing factor, alongside adverse childhood experiences (ACE). For instance, several studies have concluded that individuals with FND exhibit elevated rates of post-traumatic stress disorder (PTSD), and those with FND display disproportionately high incidence of involuntary dissociative states.

You will learn about resilience and how to increase your on resilience in the face of stressful external and internal experiences. Resilience is your ability to quickly and fully recover from challenging, stressful, and traumatic events.

Being resilient means you have the capacity to face stressors, to lean into discomfort, instead of avoiding challenges. Part of the model of how Dr. MOenter works is to NOT use the word “triggers.” Many professionals talk about “triggers” in the context of FND. What Dr. Moenter has seen in her work with FND is that people naturally orient away from “triggers” creating a pattern of avoidance. Such avoidance, over time, leads to a very limited lifestyle and a lack of trust and strength necessary to lean into the discomfort of FND, which eventually will help reduce symptoms.

Dr. Moenter introduces the concept of “precursors” feelings, thoughts, and physical sensations that can be an indicator that your nervous system is at the beginning stages of dysregulation.

“True freedom means living our lives fully, not avoiding, not “coping,” but truly developing the capacity to be with all that life offers us.” Afra Moenter, Ph.D.

Functional Movement Disorders can be divided into tremors, twitches and jerks, gait problems (difficulty walking), functional weakness. These functional symptoms are not caused by damage or disease of the nervous system.

Dr. Moenter talks about involuntary and voluntary movements, and how to relate to and potentially ease involuntary symptoms in your body.

Dr. Moenter explores emotional imbalances as part of FND. Research shows that individuals with FND have

Common emotions that individuals with FND feel are shame, anxiety, despair, hopelessness, helplessness, and fear. Dr. Moenter’s explains how emotions can be an expression of a regulated (sadness, curiosity, anger, fear etc.) or a dysregulated (terror, rage, shame, obsession etc.) nervous system. As part of the FNDcourage course you will learn how to identify your emotions as they relate to your nervous system activation and learn how to self-regulate your emotional state. Such emotional self-regulation can positively impact your functional neurological symptoms.

Dr. Moenter also explores how emotions contribute to your body posture, how you hold yourself in your body, and how in turn that experience might make you more susceptible to certain FND symptoms. By learning about and changing your Emotional Anatomy (Stanley Keleman) you will increase your interoception (body awareness) and increase your ability to regulate your nervous system.

Many individuals with FND describe functional cognitive symptoms. Symptoms vary, but can often include:

If you experience any of these symptoms as part your FND, your challenges might not be due to you loosing your intellectual capacity or curiosity. Dr. Moenter views cognitive symptoms as an often temporary limitation; potentially caused by severe dissociative states and/or a result of the chronic stress of FND (or other life-altering events). The exposure to chronic stress and trauma can impair the functionality of the pre-frontal cortex (responsible for executive function, decision making, etc.) and therefore can leave you with a limited capacity to think clearly or make sound decisions for yourself.

This website uses cookies to improve your experience while you navigate through the website. Out of these, the cookies that are categorized as necessary are stored on your browser as they are essential for the working of basic functionalities of the website. We also use third-party cookies that help us analyze and understand how you use this website. These cookies will be stored in your browser only with your consent. You also have the option to opt-out of these cookies. But opting out of some of these cookies may affect your browsing experience.
Necessary Always Enabled
Necessary cookies are absolutely essential for the website to function properly. These cookies ensure basic functionalities and security features of the website, anonymously.
Functional
Functional cookies help to perform certain functionalities like sharing the content of the website on social media platforms, collect feedbacks, and other third-party features.
Performance
Performance cookies are used to understand and analyze the key performance indexes of the website which helps in delivering a better user experience for the visitors.
Analytics
Analytical cookies are used to understand how visitors interact with the website. These cookies help provide information on metrics the number of visitors, bounce rate, traffic source, etc.
Advertisement
Advertisement cookies are used to provide visitors with relevant ads and marketing campaigns. These cookies track visitors across websites and collect information to provide customized ads.
Others
Other uncategorized cookies are those that are being analyzed and have not been classified into a category as yet.
SAVE & ACCEPT